The once flourishing Ebertplatz became one of the forgotten places in Cologne. The place will be getting renovated, and until this is happening, it is open for artists and wonderful projects to bring live to it under the name of “Unser Ebertplatz”.

I was one of many other artists who took part at this particular project, a dia projection. This was a part of the Kellerlichter exhibition, alongside light and sound installations. The analog 35mm dias were projected on two seperate, large windows. Many incredibly dedicated people worked very hard to make this happen, especially the peeps from AwwwDesign Roman Jungblut and Claus Daniel Herrmann. It was a super event. Thank you. 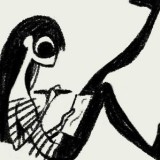 Hi, leave me a message!

More of my stuff at